Gracefully off-kilter, stylized as semaphores, the shadow of a man and an outlined woman are positioned at the center of a sea shell spiral. Are they dancing on air—or falling into the void? 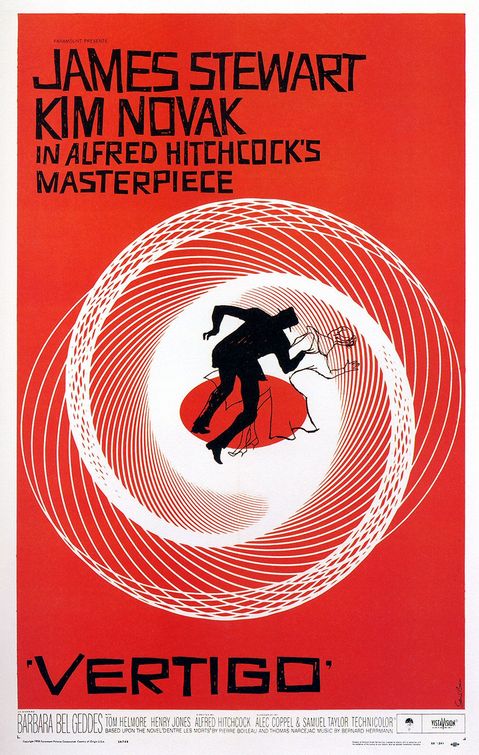 The poster for Alfred Hitchcock’s Vertigo is scarcely less haunting than the movie. I first saw the image, without understanding what it was, as a nine-year-old on summer vacation and carried the memory with me for some twelve or fifteen years before I first saw the film. It was, as the filmmaker Chris Marker—one of Vertigo’s most ardent admirers—might say, a memory of the future.
As Vertigo is the most uncanny of movies, it feels more than coincidental that on August 1, two days following Marker’s death, at ninety-one, in Paris, the British film journal Sight and Sound announced, with no little fanfare that, after forty years, his favorite movie had finally dethroned Citizen Kane atop the magazine’s once-a-decade critics poll.
Kane is the movie that hyper-dramatized the act of filmmaking. Vertigo is about film-watching in extremis—the state of being hopelessly, obsessively in love with an image. Unlike Kane (or Psycho for that matter), Vertigo was not immediately recognized as great cinema, except in France by people like Marker. Steeped as it is in the pathos of unrecoverable memory, Marker’s La Jetée (1962) was probably the first movie made under Vertigo’s spell.
Tied for fiftieth place (one vote ahead of Rear Window) in the Sight and Sound poll, La Jetée is Marker’s most generally known work, in part because it was remade in the mid 1990s by Terry Gilliam as 12 Monkeys. Marker was the opposite of a celebrity; he was famous not for his well-knownness but for a certain willful unknowability. The man born Christian François Bouche-Villeneuve was permanently incognito. He allowed few interviews and carefully concealed his personal life; although he turned his camera on countless people, including several fellow filmmakers (Andrei Tarkovsky, Akira Kurosawa), he never allowed himself to be photographed.